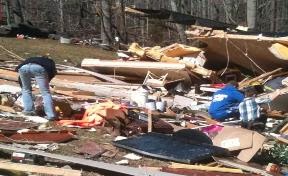 According to the National Institute of Standards and Technology, 135 of 161 deaths caused by the 2011 tornado that hit Joplin, Mo., resulted from building failures. The tornado damaged more than 8,000 homes and buildings, and "People died in commercial, retail and residential structures due to lack of emergency shelters and basements," Kevin Murphy reports for Reuters.

Model building codes used in many states protect homes and public buildings from hurricanes, floods and earthquakes—but not from tornadoes, because of their extraordinary wind speeds, Murphy writes. "Officials recommended 16 code and regulation changes that could be implemented on the federal, state and local levels," Greenwire reports.

"The time is right to develop and implement codes and standards that better protect our citizens and help communities recover more quickly from these powerful, but not invincible, natural forces," said Eric Letvin, director of disaster and failure studies at NIST. Letvin approximated that the upgrades required to make building more tornado-resistant would add between 5 and 15 percent to the cost of a new home—and more for a commercial structure, Murphy reports.

"The release of the agency's reports comes in the wake of tornadoes that have hit the Midwest this week, causing $1 billion in damage and killing eight people," Greenwire reports (subscription required).
Written by Al Cross Posted at 11/25/2013 11:55:00 AM