How long is the average commute in your area?

The Census Bureau's American Community Survey in 2011 found that 18.3 million American workers lived in rural areas, with 1.4 million, or 7.1 percent, traveling at least 60 minutes one-way to work. New York Public Radio has compiled an interactive map that shows average commute times in most ZIP codes. To view the map, click here. Here's a piece of it, from Cumberland, Md., to Washington, D.C.: 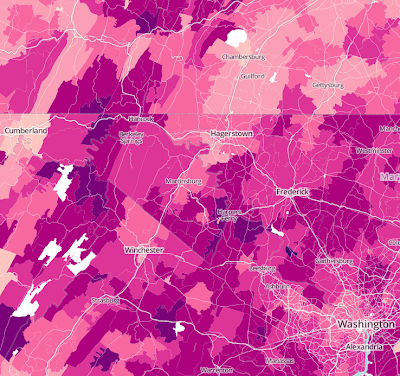 The Natural Resources Defense Council, an environmental group, found that rural commuters spend the most money on gas, averaging $4,272 per year, compared to $3,347 for suburban residents, $2,180 for urban residents, and $1,857 for those who work at home, Quentin Fottrell reports for The Wall Street Journal. (Read more) (National Household Travel Survey graphic)

It takes workers in Maryland longer to get to work than employees in any other state, while people in South Dakota have the shortest commute to work, Melissa Maynard reports for Stateline. The average commute time in Maryland in 2012 was 31.9 minutes, while the average commute in South Dakota was 16.7 minutes. The national average was 25.4 minutes. The number of people driving to work alone rose from 75.5 percent to 76.3 percent from 2008 to 2012. More people are working from home, with the number going up from 4.1 percent to 4.4 percent. (American Community Survey map)