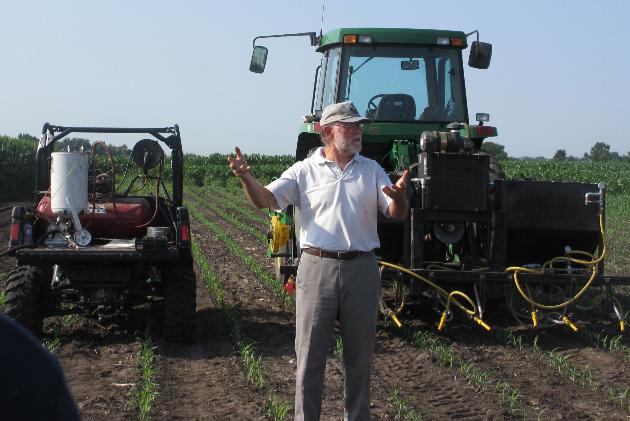 A U.S. Department of Agriculture research agronomist in Minnesota is experimenting with a pesticide-free way to kill weeds that could eliminate or greatly reduce the need to use chemicals to kill the intruders, Tom Meersman reports for the Minneapolis Star Tribune. Farmer Frank Forcella "uses an air compressor to spray gritty material on both sides of a crop that kills young weeds without harming corn or soybeans." While Forcella mainly uses dried corncob bits, he said he has also has success with ground walnut shells, corn gluten meal and soybean meal. (USDA photo by Dean Peterson: Frank Forcella)

"The tactic is gaining attention from organic farmers who don’t use chemicals and from food companies seeking to market pesticide-free snacks and other products," Meersman writes. Forcella told Meersman, “It obliterates the weed, especially if it’s a small broad-leaved weed like Lamb’s quarters or pigweed that’s one to three inches high. The corn plants growing next to them are taller and thicker and can withstand the grit blast, but the weeds just disappear.” (Read more)
Written by Tim Mandell Posted at 8/26/2014 12:14:00 PM