Getting a degree not enough; it must be in the right field to avoid feeling underemployed

Fewer rural high school students move on to college than their urban counterparts, and fewer rural residents have college degrees. Only 17 percent of rural adults 25 and older have college degrees, with 31 percent of rural residents ages 18 to 24 enrolled in college in 2009, compared to 46 percent in urban areas and 42 percent in suburban areas, Diette Courrégé Casey reports for Education Week. 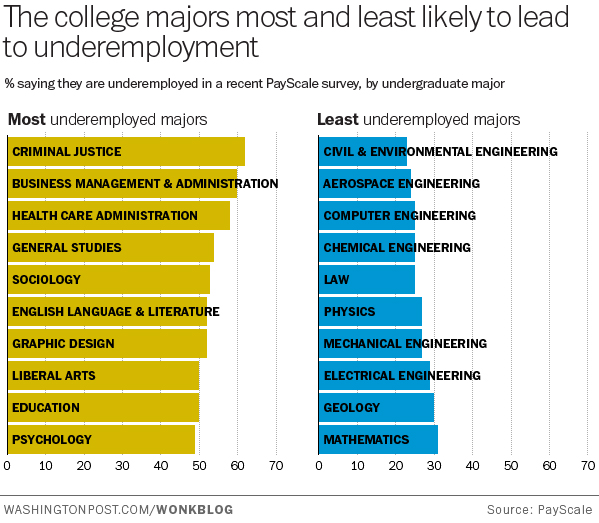 But just getting a degree isn't enough in this day and age. What students major in is key to their success in the job market, says Payscale, an online salary, benefits and compensation information company. The company conducted a survey asking 68,000 workers if they feel underemployed, Christopher Ingraham reports for The Washington Post. Nearly half of respondents—43 percent—said they are underemployed, including 39 percent of men and 48 percent of women. Of those respondents, most cited pay as the reason they feel underemployed. (Post graphic)