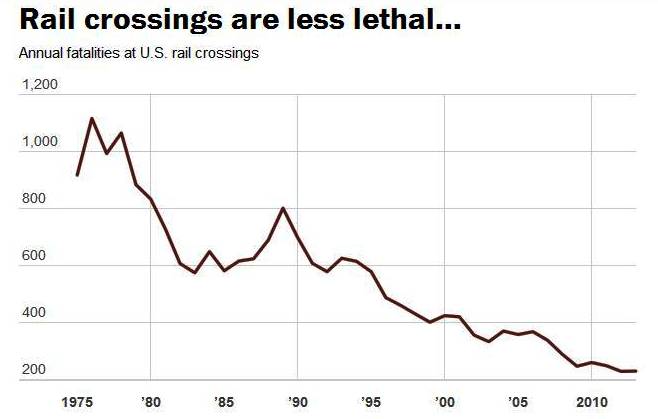 Chris Pflaum, president of Spectrum Economics, an economic-analysis firm in Kansas City, "attributed the decline to a national effort to close unnecessary rail crossings, forcing motorists to travel up the line in small towns or rural areas to a single lighted and gated crossing," Ehrenfreund writes. "State transportation authorities have added gates and lights at other crossings so that in all there are fewer crossings marked only by a crossbuck." (Post graphic)

"Another life-saving innovation has been equipping locomotives with three headlamps instead of just one," Ehrenfreund writes. "A single light makes it difficult for passers-by to gauge the distance and speed of an approaching train. Meanwhile, the public is increasingly aware of the dangers of crossing the tracks." (Read more)
Written by Tim Mandell Posted at 2/06/2015 12:45:00 PM