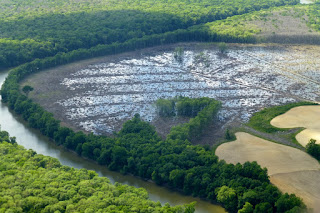 A growing European demand for fuel made from American trees has created jobs aplenty in the Southeast but could also "lead to more carbon pollution for decades to come, while also putting some of the East Coast’s most productive wildlife habitats at risk," Joby Warrick reports for The Washington Post. (Warrick photo: The remains of a site in northeastern North Carolina where trees were chopped down to be used for fuel)

Soaring demand for fuel made from oak and poplar trees "has led to the construction of more than two dozen pellet factories in the Southeast in the past decade, along with special port facilities in Virginia and Georgia where mountains of pellets are loaded onto Europe-bound freighters," Warrick writes. "European officials promote the trade as part of the fight against climate change. Burning 'biomass' from trees instead of coal, they say, means fewer greenhouse gases in the atmosphere."

"But that claim is increasingly coming under challenge," Warrick writes. "A number of independent experts and scientific studies—including a new analysis released Tuesday—are casting doubt on a key argument used to justify the cutting of Southern forests to make fuel." A study last month by the Natural Resources Defense Council found that the practice “can increase carbon emissions relative to fossil fuels for many decades—anywhere from 35 to 100 years.”

William H. Schlesinger, the former dean of Duke University’s Nicholas School of the Environment and Earth Sciences and one of nearly 100 scientists to sign a letter to the Environmental Protection Agency last year asking for stricter guidelines on using biomass to generate electric power, told Warrick, “From the point of view of what’s coming out of the smokestack, wood is worse than coal. You release a lot of carbon in a short period of time, and it takes decades to pull that carbon back out of the atmosphere.”

The pellet makers and their supporters "dismiss the criticisms, saying their industry will help lower greenhouse gas emissions over time, in part by giving landowners an incentive to plant still more trees," Warrick writes. Gretchen Schaefer, spokeswoman for the National Alliance of Forest Owners, a trade group, told him, “Healthy markets have contributed to a 50 percent increase in volume of trees since the 1950s, which help offset 15 percent of U.S. carbon emissions annually."

Exports of wood pellets doubled between 2012 and 2014, from 2 million tons to 4.4 million, "and climate policies are expected to drive even higher increases over the next decade, Warrick writes. "After surpassing Canada in 2012, the U.S. 'continues to be the largest wood pellet exporter in the world,' an April report by the U.S. Energy Information Administration stated." (Read more)
Written by Tim Mandell Posted at 6/03/2015 01:03:00 PM