The federal government is reaching out to rural Americans through motivational text messages in an effort to curb smokeless tobacco use. The smokeless rate among rural Americans is 11 percent "and has not decreased significantly in the past decade," mostly because of limited access to intervention, says the U.S. Department of Health and Human Services in the projection description. The three-year study will deliver "scheduled gradual reduction interventions via short message service text messaging is an innovative way to increase reach of smokeless tobacco cessation interventions in rural populations."

So far, the study has cost taxpayers $477,000, Elizabeth Harrington reports for The Washington Free Beacon, a conservative news source. Study leader Devon Noonan, an assistant professor at Duke University, told Harrington, “Part of our study involves developing the message library and piloting it with smokeless tobacco users—so all I can say now is that counseling messages will be based on constructs of the Health Belief Model (perceived benefits, susceptibility, barriers, motivation and self-efficacy). Messages will ask questions for the participants to think about or suggest that they think about specific topics.” (American Lung Association graphic) 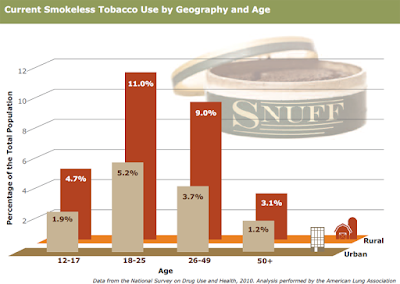