Leaders of rural power cooperatives in Kentucky said they worry that tougher standards for the state in the final version of the Obama administration's Clean Power plan to reduce carbon-dioxide emissions could lead to electricity rates that might not be affordable, James Bruggers reports for the The Courier-Journal in Louisville. "At the same time, the Environmental Protection Agency remained mum on some of its key Kentucky details, more than a week after it rolled out its first carbon dioxide rules on power plants." The new regulations have been received poorly by coal-heavy states, and the co-ops generally depend more on coal than other utilities.

"The co-op leaders said they want the courts to suspend the rules until their legality can be determined, which could take years," Bruggers writes. "One of the biggest concerns of the co-ops, which serve 1.7 million Kentucky residents, is that these member-owned utilities may have to close coal-fired power plants sooner than planned, said Robert Berry, chairman and chief executive officer of Big Rivers Electric Corp., based in Henderson. That could leave the cooperatives burdened with 'stranded assets' costs that their members will have to cover, he said." In other words, the plants would no longer produce electricity but the co-ops would still be paying for their construction.

On the other hand, Bruggers reports, "Some business leaders and environmental advocates have been praising the president for taking a historic step to help slow global warming. Some are embracing the new regulations as a chance for Kentucky to improve public health and the environment by moving away from coal and the pollution it causes during mining and burning."

"EPA is seeking a nationwide 32 percent reduction of carbon dioxide emissions from power plants by 2030," Bruggers notes. "Each state has its own goals and can develop its own compliance plan. Kentucky would need to cut its carbon emissions 30 percent to 40 percent from 2012 numbers, according to EPA." The original goal was only 18 percent. Kentucky Attorney General Jack Conway, the Democratic nominee for governor, joined his Republican counterparts in 15 other states Thursday in asking a federal court in Washington to postpone the effect of the plan until its legality can be determined. (Read more) (EnergyWire map) 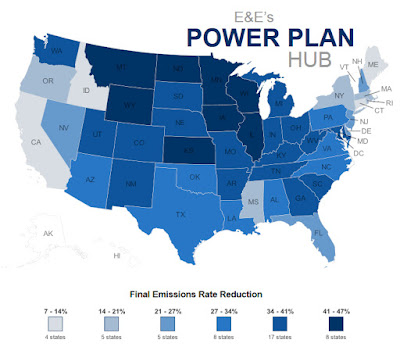