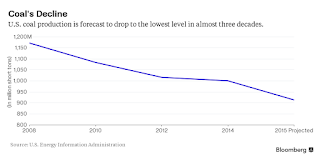 The U.S. coal output "will shrink to 913.6 million tons in 2015, the least since 1986," the U.S. Energy Information Administration said on Wednesday in its Short-Term Energy Outlook, Mario Parker reports for Bloomberg. This is the seventh time this year the outlook has been lowered. (Bloomberg graphic)

The report states, “Lower mining costs, cheaper transportation costs and favorable exchange rates will continue to provide an advantage to mines in other major coal-exporting countries compared with U.S. producers,” Parker writes. "Coal’s share of electricity generation will fall to 35 percent, the lowest in records going back to 1949, EIA forecasts show." Jeremy Sussman, an analyst at Clarksons Platou Securities in New York, told Parker, “Nobody was expecting it to be a good year for coal, but it’s certainly turned out to be worse than most were expecting." (Read more)
Written by Tim Mandell Posted at 9/10/2015 01:38:00 PM