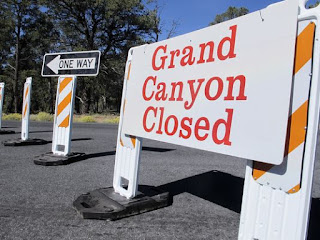 A government shutdown could lead to 770,000 visitors getting turned away from national parks every day, costing national parks $42 million per day in visitor spending, Clark Bunting, president of the National Parks Conservation Association wrote in a letter to Congress, which will shut down if a fiscal year budget is not approved on Wednesday. (Associated Press photo by Brian Skoloff: 2013 government shutdown)

The 2013 shutdown, from Oct. 1-16, forced parks to turn away "almost eight million visitors, costing local communities nearly a half billion dollars in lost revenue," Bunting wrote. "Rather than threatening another damaging shutdown, Congress should be preparing for the influx of visitors expected during the national parks’ 2016 centennial year by pursuing a deal that can allow for needed restoration of funding for national parks. We urge swift passage of a bipartisan continuing resolution clean of environmentally damaging policy riders, followed by a committed bipartisan effort to enact a budget deal that replaces the sequester and allows for the needed restoration of funding for the National Park Service in Fiscal Year 2016.” (Read more)
Written by Tim Mandell Posted at 9/24/2015 01:29:00 PM