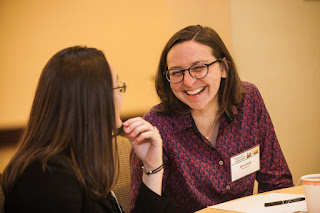 Re-framing rural news stories to avoid stereotypes—rural poverty and picturesque landscapes—to focus instead on affecting public policy in rural communities, was one of the focuses of a workshop on Tuesday at the National Rural Assembly in Washington D.C., Gabe Schwartzman reports for the Daily Yonder. About 25 young adults from around the country participated in the day-long workshop. (Yonder photo by Shawn Poynter: Ada Smith of Kentucky and Rebecca Haider of Minnesota discuss re-framing rural stories at the National Rural Assembly)

"No matter where they are located, the participants said their communities frequently get pigeon-holed in the metro-based media coverage that influences public policy," Schwartzman writes. Eric Dixon, a policy coordinator for the Appalachian Citizen’s Law Center and an Eastern Kentucky resident, told Schwartzman, "It’s important to remember that poverty in rural places was not inevitable, that it was created by a set of policy decisions. Policy makers don’t understand that it’s systemic, that it’s not people just as individuals who are facing these issues.”

Schwartzman writes, "Young leaders identified other challenges in effectively communicating with policy makers, from the lack of accurate and accessible rural data to the difficulty accessing elected officials. Rebecca Haider, who manages data research and outreach for the Center for Small Towns at University of Minnesota in Morris, said survey data for small towns is often inadequate. The Census Bureau’s American Community Survey, for example, can be misleading or inaccurate because it does not sample enough residents to be statistically valid for many uses, she said."

One workshop group took the New York Times article about rural poverty, "What’s the Matter with Eastern Kentucky," which called the region the worst place in the U.S. to live, and changed the approach to the story, Schwartzman writes. Claire Boyd, a sophomore at the University of North Carolina, said the region wasn’t an economic dead-end, as portrayed in the article, noting that the region has had a recent surge in youth led businesses. (Read more)
Written by Tim Mandell Posted at 9/09/2015 01:22:00 PM