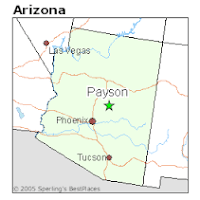 The Local Media Association, formerly the Suburban Newspapers Association, has announced its 2015 newspapers of the year. Newspapers must enter the contest to win. Winners were announced in six categories, including Class A, non-dailies up to 10,000 circulation, and Class E, dailies under 30,000.

The winner in Class A was the Payson Roundup, a Rim County, Arizona, paper owned by The World Company. (Best Places map: Payson, Ariz.) Second place went to the Chaska Herald in Minnesota, third place to the Jackson Hole News & Guide in Wyoming and honorable mention to The Half Moon Bay Review in Northern California. In Class E the top spot went to The Santa Fe New Mexican, second to the Sioux City Journal, third to the Beaver County Times of Beaver, Pa., and honorable mention to the Southeast Missourian of Cape Girardeau, Mo. (Read more)
Written by Tim Mandell Posted at 12/21/2015 12:00:00 PM