Researchers at the University of Vermont’s Gund Institute for Ecological Economics have created a county-level map showing that bees are "disappearing in many of the country’s most important farmlands—including California’s Central Valley, the Midwest’s Corn Belt and the Mississippi River Valley," Joshua Brown reports for the university.

The map is part of a study published in Proceedings of the National Academy of Sciences, which found that bee populations declined by 23 percent from 2008 to 2013, and 39 percent of U.S. croplands that depend on pollinators "face a threatening mismatch between rising demand for pollination and a falling supply of wild bees," Brown writes. The study "indicates that farmers will face increasing costs—and that the problem may even destabilize the nation’s crop production." (University of Vermont map) 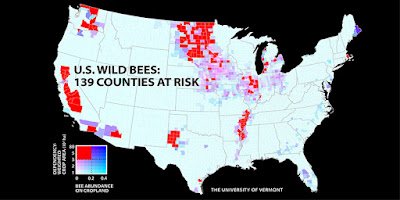 While recent studies have indicated that pesticides, climate change, and diseases have been largely responsible for a decline in bee populations, the Vermont study "also shows that their decline may be caused by the conversion of bee habitat into cropland," Brown writes. "In 11 key states where the new study shows bees in decline, the amount of land tilled to grow corn spiked by 200 percent in five years—replacing grasslands and pastures that once supported bee populations."

The study "identifies 139 counties in key agricultural regions of California, the Pacific Northwest, the upper Midwest and Great Plains, west Texas, and the southern Mississippi River valley that have the most worrisome mismatch between falling wild bee supply and rising crop pollination demand," Brown writes. "These counties tend to be places that grow specialty crops—like almonds, blueberries and apples—that are highly dependent on pollinators. Or they are counties that grow less dependent crops—like soybeans, canola and cotton—in very large quantities."
Written by Tim Mandell Posted at 12/23/2015 12:33:00 PM