States are investing millions of dollars to help "new immigrants learn English and acclimate to American culture, hopeful that it will pay off with economic activity," Tim Henderson reports for Stateline. The youngest immigrants are in North and South Dakota, and those states have a median immigrant age of 34. Kentucky is next, at 36, followed by Nebraska, Oklahoma and Iowa (37) and Wyoming, Kansas, Minnesota, Arkansas, Mississippi, Alabama, Tennessee and Indiana (38). The average oldest immigrants are in Hawaii (48) and Florida (47).

"Immigrants fill many of the country’s labor gaps: from low-skilled work in agriculture to high-skilled work in science and technology," Henderson writes. "Having an immigrant population that is younger often means the newcomers are contributing to a state’s workforce, which can increase the tax base. But it also can mean young families that have children. And that can burden public schools, which are obligated to teach students who don’t speak English."

"Having an immigrant population that skews older can mean a state has a greater percentage of immigrants who have aged out of the workforce and may need help with health care, housing and retirement—though not always," Henderson. But the states with the oldest immigrants, Hawaii and Florida, "have settled in enclaves where many speak the same language or share the same culture," while immigrants in Hawaii—mostly from Asia—tend to be more affluent. (Stateline map: For an interactive version, click here) 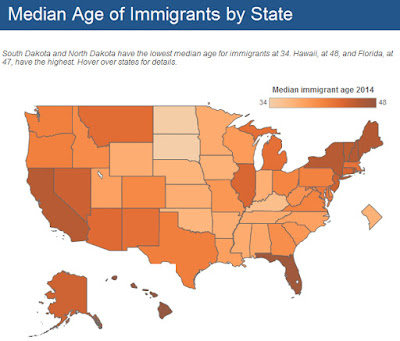