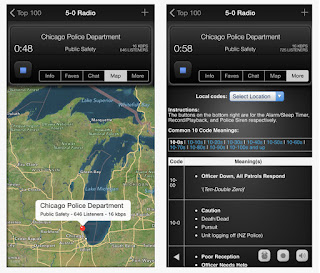 Gone are the days of keeping an ear tuned to the police scanner, yelling for newsroom silence because it sounds like a major news story might be breaking, or hearing secondhand news that something important may have happened and calling the police station or sheriff's office only to find out that it was nothing at all. The rise of technology has led to a series of free apps that can keep every journalist tuned in to what's happening at the local, state and even national level. (iTunes photo of 5-0 Radio Police Scanner)

Josh Park of the Ohio Newspaper Association suggests three free apps available to download that offer a variety of sources for journalists.

Police Scanner + Free
This app for the iPhone allows you to browse police, fire, EMS, weather, railroad and radio stations by location or by most popular. You can search scanners in 79 Ohio counties, in other states and even other countries. One helpful feature of the app allows users to record the station and email the soundbite as an mp3 file. Reporters can use this feature to send recordings to editors or use the dispatch calls as quotes in articles.

Scanner Radio
“Scanner Radio” for Android phones works similarly to the previous two apps when locating radio stations through GPS. The app features channels such as amateur radio, aviation, disaster event, marine, other, public safety, rail and special event. With this app, users can set up notifications to their phone whenever there are a certain number of listeners on one station. This can be a great tool for breaking news, as more people will be tuned in to the station.
Written by Tim Mandell Posted at 1/07/2016 12:47:00 PM