Wildlife refuge with armed protesters was one of the nation’s first; U.S. has 563 such sanctuaries 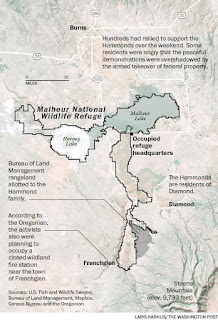 The U.S. has 563 national wildlife refuges and 38 wetland management districts, states the U.S. Fish and Wildlife Service. The refuges "provide habitat for more than 700 species of birds, 220 species of mammals, 250 reptile and amphibian species and more than 1,000 species of fish. More than 380 threatened or endangered plants or animals are protected on wildlife refuges," and millions of migrating birds stop at the refuges during annual trips to their summer and winter homes. (Washington Post graphic: Malheur National Wildlife Refuge)

Oregon's Malheur National Wildlife Refuge has become center stage after armed protesters on Saturday seized the main building to protest "the arson convictions of two local ranchers, Dwight Hammond and his son Steven Hammond, who set fires that burned federal lands," Lisa Rein reports for The Washington Post. "The ranchers said they were fighting wildfires and invasive vegetation, but federal officials said they were covering up poaching on federal land."

The history of the refuge dates back to the late 1880s, when "the land captured the attention of two photographers who became alarmed that plume hunters had decimated many North American bird species in pursuit of feathers for the hat industry," Rein writes. "They approached the Oregon Audubon Society and pressed for a reservation to protect the remaining birds and other wildlife."

President Teddy Roosevelt, who created 51 refuges, "agreed to set aside what at the time were unclaimed government lands in the area 'as a preserve and breeding ground for native birds,” marking it as one of the nation's first refuges, Rein writes. "Gradually the area under federal control expanded. The government bought a 65,000-acre parcel under private ownership in 1935. The Civilian Conservation Corps built many of the 13 historic buildings in the 1930s and early 1940s, including the one occupied by the protesters. Another 14,000 acres was sold in 1942 by a livestock company, adding to the refuge’s shorebird habitat and waterfowl nesting areas."

"Today the refuge is more than 187,700 acres of wildlife habitat, including 120,000 acres of wetlands that provide a crucial stop for waterfowl along the Pacific Flyway," Rein writes. "Colonial waterbirds, sandhill cranes, redband trout are represented." Last year the refuge had 23,967 visitors, including birders, hunters and outdoor recreationists. (Read more)
Written by Tim Mandell Posted at 1/05/2016 01:45:00 PM