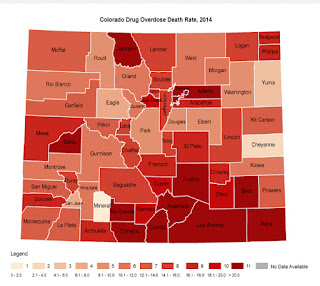 Drug overdose rates in Colorado have hit record levels, increasing 68 percent from 2002-2014, with numbers especially high in rural Southern agricultural counties, says a report by the Colorado Health Institute. In 2002, the state had 9.7 drug overdose deaths per 100,000 people. Deaths nearly doubled in 2014, up to 16.3 per every 100,000 residents, above the national average of 14.7 drug-related deaths per every 100,000 people. (Colorado Health Institute graphic: Drug overdose deaths in 2014) An influx of heroin to the state's poorest and least populated counties is one of the reasons for the increase, along with a rise in abuse of prescription drugs and methamphetamine. In 2012-13 Colorado ranked 12th nationally in non-medical use of opioid painkillers, with state statistics showing that 25 percent of state residents said they had used pain medications not prescribed by their doctor and 29 percent saying they had used pain medications prescribed for someone else.

Overall, 63 of Colorado's 64 counties experienced an increase in drug overdose deaths from 2002 to 2014, David Olinger reports for The Denver Post. Tamara Keeney, a policy analyst at the Colorado Health Institute, told Olinger, "We do know that heroin and prescription drugs are what's driving the increase across the board. Cocaine has actually decreased as a cause. It was surprising to us to see that it wasn't just the urban counties."

Bent County Coroner Dave Roberts, who said many of the deaths in his county are the result of prescription painkillers, said the average age of death is early 30s, Olinger writes. Roberts told him, "When I first started, there were hardly any overdoses. Now it's really prevalent... It's amazing the amount of meth that's in small counties."
Written by Tim Mandell Posted at 2/11/2016 04:43:00 PM