Data show growing life-expectancy gap between the poor, who are more rural, and the rich

The life expectancy gap between rich and low-income Americans continues to grow, says a report by the Brookings Institution. That's a concern in rural areas, especially in the South and Appalachia, where poverty rates are some of the highest in the country. Mississippi had the nation's highest poverty rate in 2014 at 21.5 percent, according to the Census Bureau's American Community Survey, with rates of at least 18 percent in Alabama, Arizona, Arkansas, Georgia, Kentucky, Louisiana, New Mexico, South Carolina, Tennessee and West Virginia. 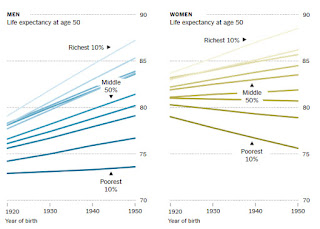 The Brookings study found that among men born in 1950, the top 10 percent of wage earners live an average of 14 years longer than the bottom 10 percent of earners, much more than the six-year life expectancy difference for men born in 1920, Sabrina Tavernise reports for The New York Times. For women the difference gap increased to 13 years. (NYT graphic; click on it to view a larger version)