Merging small towns or counties rarely works; history, politics and pride get in the way

Small towns and counties rarely merge—it has only happened 42 times since the 19th century, according to the National Association of Counties—mostly because consolidation typically benefits one entity more than the other, Elaine Povich reports for Stateline. "State officials and affected residents almost always must approve a proposed merger, and residents often balk, especially if one entity is in better fiscal shape. Government workers are usually opposed, fearing they will lose their jobs. And politics plays a role, too, as elected officials generally aren’t keen on giving up power." (Stateline chart) 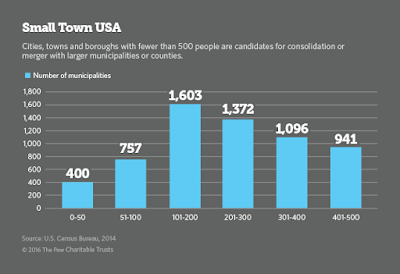 Northern Illinois University professor Norman Walzer, who worked on a December report on local government consolidation, "said the baseline question is whether two or more units of government are needed if they do essentially the same thing and cover the same people," Povich writes. He told her that “Logically, the answer is ‘no,’ ” but added that "history, politics and pride most times combine to undermine logic."

One problem is that overlapping governments create confusion, Povich writes. "The number of governmental entities has grown so much that states sometimes don’t even know how many municipalities or municipal authorities they have. Illinois identified 8,480 units of government that can collect taxes or have some fiscal authority, Walzer said." Jeff Fulgenzi, senior planner with Citizens’ Efficiency Commission, said "Illinois statute allows for tax collectors at the township level, but 96 percent of property tax payments are made to the county treasurer, not the township."

Advocates for mergers say the process saves money, Povich writes. Liz Lempert, who in 2012 was elected mayor of the Municipality of Princeton—formed with the merger of the Township and the Borough of Princeton, N.J.—said consolidating 911 centers "saved money that was used to add a couple of police stations,". Povich writes. "The main challenge for Princeton has been merging the two public workforces." Lempert told Povich, “Can you have two people side by side doing the same job, getting paid differently? No.” Lempert said she "solved the problem by 'harmonizing' the pay scales, which meant the lower-paid people generally got bumped up. That move, she acknowledged, didn’t save money, but kept morale up among municipal workers. (Read more)
Written by Tim Mandell Posted at 3/11/2016 12:42:00 PM