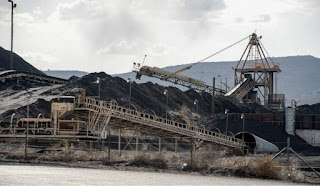 Utah state legislators last week passed a bill approving $53 million "to help build a deep-water port in California in the belief the project will allow Utah to sell coal and other products overseas," Lee Davidson reports for The Salt Lake Tribune. Republican Gov. Gary Herbert is expected to sign the bill into law. (Tribune photo by Francisco Kjolseth: Coal is piled up at the Levan transfer facility along Interstate 15—south of Nephi, Utah.)

Rep. Brad King (D-Price), who represents Utah's coal country, "argued the deal poses no risk to taxpayers because the state treasury would be reimbursed almost instantly by the Permanent Community Impact Board (CIB) with money from federal mineral royalties," Davidson writes. "At the same time, the lone Democrat representing rural Utah said the deal has a good chance of saving jobs by opening new markets abroad for Utah coal and other products from oil to alfalfa."

"Critics have called it a suspect 'shell game,' and it has sparked an outcry from environmental groups in California and Utah that say such coal shipments would further global warming and question if there is a market for such exports," Davidson writes. "Environmentalists filed complaints with Utah Attorney General Sean Reyes challenging the use of CIB funds for an out-of-state project. Reyes has declined to comment on the legality, but concerns led to the unusual plan to trade royalty proceeds for state money that has fewer strings and regulations attached."

Officials in Oakland are reviewing evidence to see if transporting coal would endanger residents, David DeBolt reports for the San Jose Mercury News. "Coal would be taken by rail from Utah to Oakland and shipped overseas to Asia. Environmental groups argue it would expose West Oakland residents to greater risks of respiratory illness, and the exports of coal fly in the face of the state's commitment to clean air and energy." Sen. Loni Hancock (D-Oakland) last month "introduced four bills targeting coal shipments in California and asked the California Transportation Commission to stop funding to the Oakland project."
Written by Tim Mandell Posted at 3/15/2016 12:39:00 PM