With all the misinformation floating around the internet about climate change, a group of climate scientists are trying to set the record straight with a website that reviews the credibility of climate journalism. Climate Feedback was created to bring "the expertise of the scientific community into the world of online climate coverage to provide readers and authors with in-situ feedback about the content’s scientific credibility," states the website. "Climate Feedback is a project born from the reality that we are at a critical moment in history, one in which important decisions about climate change must be made. It’s a project born from the understanding that in order for our democracies to choose the right courses of action, citizens must have access to scientifically accurate information. And it’s a project born from the belief that it’s the civic duty of scientific professionals to better inform their fellow citizens in their respective areas of expertise."

Studies have shown "that only about half the population in some countries with among the highest CO2 emissions per capita understand that human beings are the driving force of our changing climate," writes Daniel Nethery, associate editor of Climate Feedback, and Emmanuel Vincent, Climate Feedback founder, for The Guardian. "Even fewer people are aware of the scientific consensus on this question. We live in an information age, but the information isn’t getting through. How can this be?" (Climate Feedback graphic: Scientists’ comments and ratings appear as a layer over the article. Text annotated with hypothesis is highlighted in yellow in the web browser and scientists’ comments appear in a sidebar next to the article) 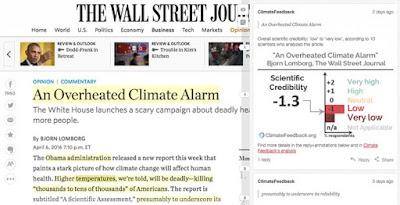 "While the internet puts information at our fingertips, it has also allowed misinformation to sow doubt and confusion in the minds of many of those whose opinions and votes will determine the future of the planet," Nethery and Vincent write. "And up to now scientists have been on the back foot in countering the spread of this misinformation and pointing the public to trustworthy sources of information on climate change."

"Climate Feedback intends to change that," Nethery and Vincent write. "It brings together a global network of scientists who use a new web-annotation platform to provide feedback on climate change reporting. Their comments, which bring context and insights from the latest research, and point out factual and logical errors where they exist, remain layered over the target article in the public domain. You can read them for yourself, right in your browser. The scientists also provide a score on a five-point scale to let you know whether the article is consistent with the science. For the first time, Climate Feedback allows you to check whether you can trust the latest breaking story on climate change." (Read more)
Written by Tim Mandell Posted at 4/27/2016 11:13:00 AM