American Rivers, a non-profit conservation organization, has released its annual report of the nation's most endangered rivers. The list changes from year to year, often with few or no repeats, so it's not really a comprehensive list of "most endangered" rivers. That's mainly a public-relations gimmick. But the list does give attention to rivers that don't get much notice outside their watersheds.

"These rivers all have two things in common: they’re threatened by mismanagement or various sources of pollution, and they’re all facing major policy decisions in the coming year that could either exacerbate those threats or rein them in," Katie Valentine reports for Climate Progress. "Millions of people depend on these rivers for drinking water, and the waterways are crucial habitats for a wide array of aquatic life."

No. 1 on the list is the Apalachicola-Chattahoochee-Flint River Basin that "provides 70 percent of the drinking water for metro Atlanta," Valentine writes. "But the rivers have been embroiled in a water dispute between Alabama, Florida, and Georgia for decades, and the states, along with Congress and the Army Corps of Engineers, haven’t managed the rivers as well as they should have, according to the report" Other rivers on the list, in descending order, are: San Joaquin River; Susquehanna River; Smith River; Green-Duwamsh Rivers; Pee Dee River; Russell Fork River; Merrimack River; St. Lawrence River; and Pascagoula River. (American Rivers map) 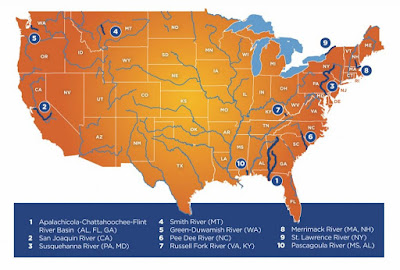