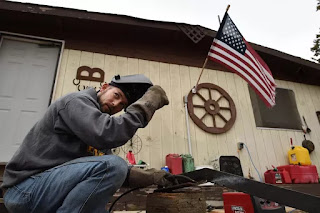 A growing movement of "largely white and rural" residents are taking up arms to defend themselves against a government they distrust, Kevin Sullivan reports for The Washington Post. The groups, which refer to themselves as patriots, demand "that the federal government adhere to the Constitution and stop what they see as systematic abuse of land rights, gun rights, freedom of speech and other liberties." BJ Soper, leader of Central Oregon Constitutional Guard, a group of about 30 started two years ago, told Sullivan, “It doesn’t say in our Constitution that you can’t stand up and defend yourself. We’ve let the government step over the line and rule us, and that was never the intent of this country.” (Post photo by Matt McClain: Soper)

Law enforcement officials say the groups are "dangerous, delusional and sometimes violent, and they say that their numbers are growing amid a wave of anger at the government that has been gaining strength since 2008, a surge that coincided with the election of the first black U.S. president and a crippling economic recession," Sullivan writes. "Law enforcement officials and the watchdog groups that track the self-styled 'patriot' groups call them anti-government extremists, militias, armed militants or even domestic terrorists." Some even jokingly call them “Y’all Qaeda” or “Vanilla ISIS.”

There are currently about 1,000 such groups, up from 150 in 2008, said Mark Potok of the Southern Poverty Law Center, which monitors extremism. "Potok and other analysts, including law enforcement officials who track the groups, said their supporters number in the hundreds of thousands, counting people who signal their support in more passive ways, such as following the groups on social media," Sullivan reports. "The Facebook page of the Oath Keepers, a group of former members of police forces and the military, for example, has more than 525,000 'likes.'"

"Much of the movement traces its roots to the deadly 1990s confrontations between civilians and federal agents at Ruby Ridge, Idaho, and in Waco, Tex., that resulted in the deaths of as many as 90," Sullivan writes. "Timothy Mc­Veigh cited both events before he was executed for the 1995 Oklahoma City bombing that killed 168 people, and he said he had deliberately chosen a building housing federal government agencies. Now a 'second wave' is spreading across the country, especially in the West, fueled by the internet and social media." (Read more)
Written by Tim Mandell Posted at 5/23/2016 10:45:00 AM