U.S. employers are finding it increasingly difficult to hire workers who can pass a drug test, Jackie Calmes reports for The New York Times. "That hurdle partly stems from the growing ubiquity of drug testing, at corporations with big human-resources departments, in industries like trucking where testing is mandated by federal law for safety reasons, and increasingly at smaller companies. But data suggest employers’ difficulties also reflect an increase in the use of drugs, especially marijuana—employers’ main gripe—and also heroin and other opioid drugs much in the news."

In 2014, 4.7 percent of Americans tested positive for illicit drug use, up from 4.3 percent in 2013, according to Quest Diagnostics, which has compiled employer-testing data since 1988. "The National Survey on Drug Use and Health reported in September that one in 10 Americans ages 12 and older reported in 2014 that they had used illicit drugs within the last month—the largest share since 2001." (NYT graphic: Drug overdose deaths by county from 2003 to 2014) 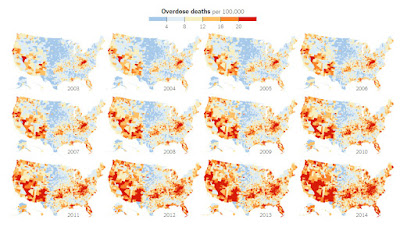 "The trend is now similar to that of the human immunodeficiency virus, or H.I.V., epidemic in the late 1980s and early 1990s, said Robert Anderson, the CDC’s chief of mortality statistics," Park and Bloch write. "Some of the largest concentrations of overdose deaths were in Appalachia and the Southwest, according to county-level estimates released by CDC.
Written by Tim Mandell Posted at 5/17/2016 12:12:00 PM