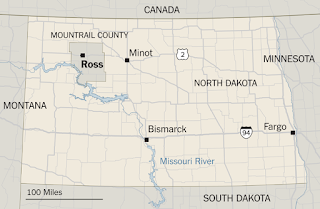 Republican presidential nominee Donald Trump's call for a ban on Muslim immigrants has been one of the more controversial topics of the race, especially in rural areas. While it may seem that they only recently have wanted to emigrate to the U.S., "Muslims have been part of the American mix for a long time, and not only in populous hubs like Brooklyn; Dearborn, Mich.; and Chicago’s western suburbs," Samuel Freedman reports for The New York Times. In one of North Dakota's most rural areas, outside the town of Ross, sits a mosque built in 1929 from immigrants from Syria and Lebanon. (NYT map)

"It is a modest square of cinder blocks, perhaps 15 feet on each side, topped with an aluminum dome and minarets," Freedman writes. "Several hundred yards off the main highway, on the outskirts of a town with barely 200 residents about 60 miles west of Minot, the mosque and cemetery exist much as they always have, surrounded by fields of wheat and corn and grazing lands. In this spot, all the industrial clamor of North Dakota’s fracking boom feels immeasurably distant."

"Amid a presidential campaign . . . that has coincided with a rising number of bias crimes against Muslim people and institutions, this little plot is a reminder that Muslims were here as far back as the Norwegians and Swedes and Germans and Finns and Poles and Jews among whom they settled," Freedman writes. Despite being discriminated against early on in North Dakota, Muslims have now been welcomed in Ross, with a Christian group in 2005 helping to fund replacing the mosque after it was badly in need of repairs.
Written by Tim Mandell Posted at 5/27/2016 08:45:00 AM