New rules will make it harder for many elderly, poor, black and Latino voters to cast ballots

New rules created ostensibly to stop voter fraud are making it more difficult for poor, black, Latino and elderly Americans, particularly in the South, to register for elections, Sari Horwitz reports for The Washington Post. "In November, 17 states will have voting restrictions in place for the first time in a presidential election. Eleven of those states will require their residents to show a photo ID. They include swing states such as Wisconsin and states with large African American and Latino populations, such as North Carolina and Texas. Many of the residents struggling to obtain a valid photo ID are elderly and poor and were born in homes rather than hospitals. As a result, birth certificates were often lost or names were misspelled in official city records."

Supporters of the laws argue that everyone should easily be able to get a photo ID, while "opponents say that the laws were designed to target people more likely to vote Democratic," Horwitz writes. "Many election experts say that the process for obtaining a photo ID can be far more difficult than it looks for hundreds of thousands of people across the country who do not have the required photo identification cards." (Post map) 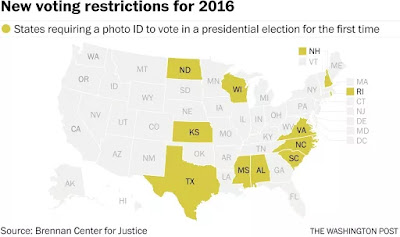 In Texas, which has one of the strictest voter laws in the nation, a federal court found that "608,470 registered voters don’t have the forms of identification that the state now requires for voting," Horwitz writes. Overall, "about 11 percent of Americans do not have government-issued photo identification cards, such as a driver’s license or a passport, according to Wendy Weiser of the Democracy Program at the Brennan Center for Justice at New York University School of Law."

University of California at San Diego researchers analyzed turnout in elections between 2008 and 2012, finding "substantial drops in turnout for minorities under strict voter ID laws.” The study's authors wrote: “These results suggest that by instituting strict photo ID laws, states could minimize the influence of voters on the left and could dramatically alter the political leaning of the electorate."
Written by Tim Mandell Posted at 5/24/2016 12:02:00 PM