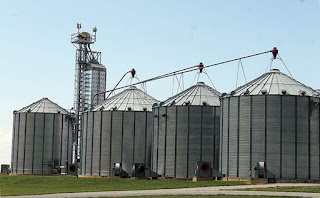 Farmers in rural Illinois are getting some of the state's fastest internet service by allowing telecommunications companies to build towers on their structures, Nat Williams reports for The Southern Illinoisan in Carbondale. The devices include "an antenna on the outside of a house or building and a cable that runs inside the home. A wireless router provides service throughout the property." (Williams photo: A wireless tower atop a grain bin in Franklin County, Illinois)

Nathan Stooke, founder of Wisper Internet, said wireless broadband is easier to provide in northern Illinois because it is mostly flat, than in the southern part of the state, where there are plenty of trees and rolling hills. Stooke told Williams, “We have towers on one-story houses, on grain elevators, whatever we can do to get as close as we can to the customer to provide them service they need. We use the farmer’s grain elevator to provide service to him and his neighbors. It works really, really well. It keeps costs down.”

Williams writes, "It’s a winning system. Those who allow the installation of towers on their property usually receive free or upgraded internet service. Their neighbors get good signals for a lot less than they paid for inferior dial-up." Some say faster and better internet is boosting agriculture, with the younger generation more willing to join in the family business now that they can access high-speed internet. (Read more)
Written by Tim Mandell Posted at 6/27/2016 10:41:00 AM