Washington state's Farm to Food Pantry program was launched in 2014 to contract food banks with local farmers for fresh produce. The program, which began with six communities, expanded to 12 communities in 2015, Sheila Hagar reports for the Walla Walla Union-Bulletin. 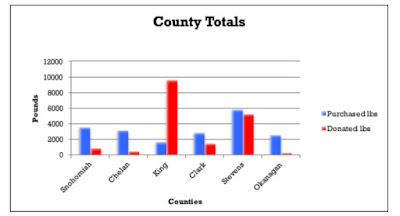 "The plan was financed with existing state food assistance dollars diverted to sustain the new concept," Hagar reports. "Not only does the program benefit low-income families without requiring additional state money, it benefits farmers and supports agricultural conservation practices, state officials say. Washington, however, didn’t want to administer the new program, so it teamed with Rotary First Harvest, the nonprofit offshoot of the Seattle-area Rotary district."

In Walla Walla, Jeff Mathias, director of Blue Mountain Action Council Food Bank "said he took the $2,500 received from the state, pledged $1,500 in hoped-for donations and split the total of $4,000 among four Walla Walla Valley farmers," Hagar writes. "In return for their $1,000, each farm has committed to give BMAC at least that much back in produce at under wholesale prices, Mathias said." (Read more)
Written by Tim Mandell Posted at 7/18/2016 10:33:00 AM