1/4 of low-income students opt out of activities due to cost; rural kids are more likely to be poor

The study report didn't have a rural-urban breakdown, but incomes are generally lower in rural areas. In 2013 nearly 2.6 million children under 18 outside metropolitan areas were living in poverty, a rate of 26 percent, double the rate in metropolitan areas, according to the Economic Research Service of the U.S. Department of Agriculture.

The poll, conducted in May by GfK Custom Research, asked 666 parents with at least one child in middle or high school to list their child's school sports, arts and clubs/other activities for the 2015-16 school year. Participants were asked: "Has your child ever received a waiver or scholarship for school participation fees?" and "Has the cost of school activities caused a drop in participation for your own child(ren)?"

Researchers found that the average annual cost per student—including equipment, travel, private lessons, fees, special events—was $302 to play sports, $218 for arts (such as music, theater or yearbook) and $124 for clubs. Ten percent of lower-income and 3 percent of higher-income families received a waiver for activity fees. (USDA graphic: non-metro poverty rates 2010-14) 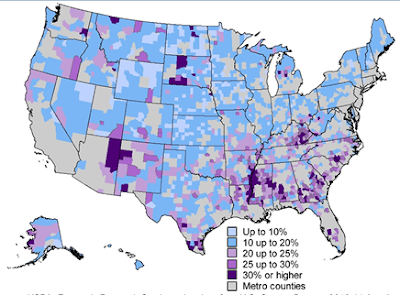