A study by Emsi, a labor-market advisory firm, found that Donald Trump won nearly every county in six key states in the Rust Belt that has "a higher-than-average concentration of manufacturing, mining or agriculture jobs," Danielle Paquette reports for The Washington Post. In those states—Michigan, Ohio, Minnesota, Wisconsin, Indiana and Pennsylvania—Trump won 437 of 489 counties. Some of those counties had supported Democratic candidates in every election since 2000. (Emsi map: Presidential election results) 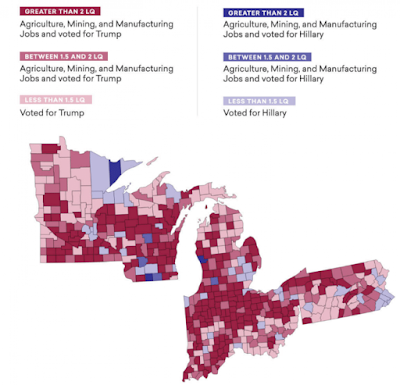 Study author John Wright said that in 93 of those counties—all won by Trump—"the share of manufacturing jobs is three times higher than the national average," Paquette writes. Wright "said areas with dense manufacturing sectors particularly pulled for Trump, perhaps because he came to represent hope for a struggling industry. Traditional manufacturing jobs in the U.S. have sharply declined since 2001, dropping, by his calculations, from 12 percent of the workforce to today’s 8.2 percent."

"Trump promised throughout the campaign to bring back American jobs, the kind vanishing across the Rust Belt," Paquette writes. "Exit polls and interviews suggest voters believed him."
Written by Tim Mandell Posted at 1/11/2017 12:11:00 PM