Dairy lobbyists are pushing to stop plant-based products from using the words "milk," "cheese" or "yogurt" on labels. Caitlin Dewey reports for The Washington Post, "In December, dairy lobbyists persuaded 32 legislators to demand that the Food and Drug Administration act on 'imitation milk products.' Those efforts join preexisting initiatives, like a special logo (above) that differentiates 'real' dairy and several cutesy, industry-funded ads that champion milk over nondairy competitors." Plant-based companies have responded by hiring their own lobbyists, or meeting with FDA officials.

"The showdown between dairy and nondairy milks has been a long time coming," Dewey writes. "Consumption of conventional milk has been cratering since the 1950s, a product of both modern concerns about fat and the explosion of consumer beverage options after the World War II. In more recent years, sales of, first, soy milk and later almond, cashew, rice, coconut and quinoa milks, have steadily eaten into dairy milk’s already shrinking market share. According to Nielsen, almond-milk sales grew 250 percent between 2011 and 2016, a period when the milk market shrank by $1 billion." (Post graphic: Dairy consumption since 1970) 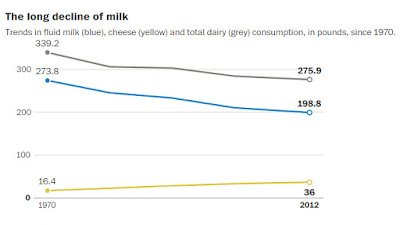 One problem is that FDA "has repeatedly declined to weigh in on the subject—despite repeat pressure from both the soybean and dairy lobbies," Dewey writes. "A spokesman for FDA said that the agency’s policy has not changed, and that it prioritizes efforts to ensure that food labels are 'truthful and not misleading.' Its last action on the milk issue was a brief aside in a much longer 2012 warning letter to a tofu company."

Lawmakers in December sent FDA a letter that said the word "milk" being used by plant-based companies is misleading to consumers and that the agency should “initiate a thorough investigation” into plant-based food labeling, Dewey writes. The National Milk Producers Federation consulted on House and Senate bills that would force FDA "to punish plant-based products that use dairy terms." Both bills have been sent to committee. The American Soybean Association and the Soyfoods Association of North America jointly sent a letter Monday opposing the bills.
Written by Tim Mandell Posted at 2/14/2017 11:54:00 AM