U.S.-Mexico wall would cut through tribe's land, which lies on both sides of the border

President Trump's plan to build a wall on the U.S.-Mexico border would cut through the heart of the Tohono O’odham Nation, whose land extends along 62 miles of the border and lies in both countries, Fernanda Santos reports for The New York Times. The tribe has about 34,000 members, 2,000 of which live in Mexico. "After the Mexican-American War and then the Gadsden Purchase in 1854 delineated the border for good, most of the tribe’s land was left in present-day Arizona, where it still controls 2.8 million acres—a territory about the size of Connecticut—while a smaller piece became part of what is now the Mexican state of Sonora."

"The Tohono O’odham reservation has been a popular crossing point for unauthorized migrants and one of the busiest drug-smuggling corridors along the southern border, in part because the federal government strengthened the security at other spots," Santos writes. "While a 20-foot-tall steel fence lines the border in San Luis, Ariz., to the west, and Nogales, Ariz., to the east, here the border is a lot more permeable, guarded by bollards and Normandy barriers measuring eight feet, maybe, and, in some areas, sinking in the eroding ground." (Times map: Tohono land on both sides of the border) 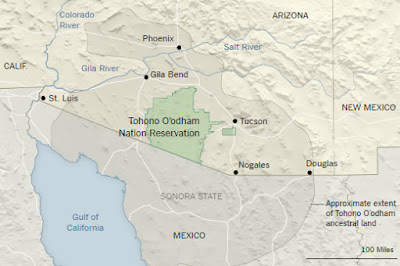 Tohono O’odham leaders have made a concerted effort to increase safety, Santos writes. The tribe "reluctantly complied when the federal government moved to replace an old barbed-wire fence with sturdier barriers that were designed to stop vehicles ferrying drugs from Mexico. It ceded five acres so the Border Patrol could build a base with dormitories for its agents and space to temporarily detain migrants. "

"The number of apprehensions on the reservation has also dropped—to 14,000 last year from 85,000 in 2003, according to the tribe’s public-safety department. Still, the vehicle barriers, installed in 2006, created new headaches. One rancher, Jacob Serapo, used to fetch water for his family and cattle from a well 100 yards from his home, but the barriers left the well on the other side, in Mexico. Now he must drive four miles a few times each week to the nearest water source on the U.S. side."

Monte Mills, co-director of the Margery Hunter Brown Indian Law Clinic at the University of Montana, said "because of tribal rights, building a wall across the lands of the Tohono O’odham Nation would most likely require an act of Congress."
Written by Tim Mandell Posted at 2/22/2017 10:19:00 AM