What residents in one rural Arizona border town think about increased security, plans for a wall

Residents in a rural border town are not happy being told what should happen in their neck of the woods by Americans and politicians from other parts of the country who back President Trump's increased border security efforts and plans to build a wall, Danyelle Khmara reports for Tucson Weekly. 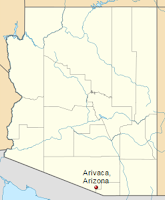 Arivaca, Ariz. (Wikipedia Map), a town with about 900 residents located 11 miles from Mexico, gained national attention in the 1990s when migrants from Mexico and Central America began crossing into the area through the Southern Arizona desert, Khmara writes. "The desert corridor was one of the few places for undocumented people to cross after a change in border policy blocked off urban points of entry."

"During the 2016 Fiscal Year, Border Patrol made almost 65,000 apprehensions in the Tucson Sector, which stretches from New Mexico to Yuma County," Khmara writes. "They wouldn't say how many were related to drug smuggling, but government data shows they seized 728,000 pounds of marijuana and 174 pounds of cocaine."

Despite a rise in border crossings, many residents say the immigrants are harmless and keep to themselves, Khmara writes. "Many humanitarians live in and frequent this little town at the crossroads of treacherous migrant trails and heightened border security . . . A lot of the population are retirees, keeping the town financially afloat. And even if there's no supermarket, the only grocery store, nicknamed 'The Merc' carries a lot of daily items."

Longtime resident Bradley Knaub told Khmara that increased border patrols seem pointless in such as small town, telling Khmara, "When I went to town last week, I had to go through two checkpoints, and I was photographed six times. That's a little intimidating. It's kind of Orwellian." Speaking of the all, he said, "The terrain is too rough to even consider, and the amount of damage to environment and endangered animals—it's just not going to happen."

Carlota Wray, who came to Arivaca from Mexico more than 30 years ago, told Khmara, "People that are not from here don't understand how it is to live in this border community. You don't know until they build the wall behind your property or they put cameras in front of you." Local resident Diana MacDonell said, "All the people making decisions, they don't live on the border. We live here. We are doing just fine."
Written by Tim Mandell Posted at 2/16/2017 12:24:00 PM