Southern drivers are the most likely to talk on cell phones while driving, while Midwestern drivers are the safest drivers and Northeastern drivers the least safe, says the Safe Driving Report 2016-17 by EverQuote Insurance. Using EverQuote's data, Stateline created an interactive map with state-level data for all five measures EverQuote ranked for safety: phone use; speeding; acceleration; braking; and turning. (Stateline interactive map ranks states by safe driving habits. Darker states are safer) 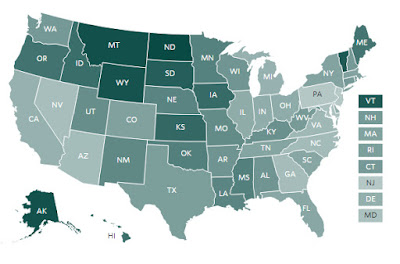 When it comes to driving while using a cell phone the least safest states are Louisiana, Florida, Tennessee, Mississippi and Idaho. The top three safest states are Vermont, Montana and Oregon. Despite being among the top five overall least safe driving states, New Hampshire and Connecticut ranked fourth and fifth for phone use.

"Some of the differences may be explained by state laws," Tim Henderson reports for Stateline. "Few Southern states, for example, have blanket laws that ban the use of cellphones while driving, according to an assessment of state laws this month by the National Conference of State Legislatures. Lower speed limits in the Northeast may make it easier to get caught speeding."

One reason Midwestern drivers might be safer is that "in big, wide-open spaces where speed limits are high and drivers few and far between, there appears to be less speeding," Henderson writes. Peter Norton, a technology historian at the University of Virginia, said Midwestern populations tend to be older, "which means they may be more experienced drivers and less likely to be cellphone-dependent."
Written by Tim Mandell Posted at 4/13/2017 11:52:00 AM