Does failing to attain the American Dream lead to lower life expectancy, especially in rural areas?

Does the alarming trend of higher death rates increasing among middle-aged non-Hispanic whites with a high school diploma or less stem from a despair borne of a feeling that they are have failed to meet society's expectations of a college education and economic success? So says Robert J. Samuelson in his weekly economics column for The Washington Post. Rural areas have higher rates of residents that lack a college or high school degree. (Life expectancy rates in 2010: Health of the States study by the Center on Society and Health at Virginia Commonwealth University and the Urban Institute) 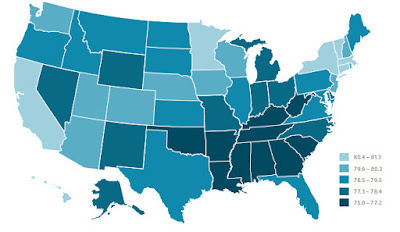 Researchers have found that "the central problem is a 'steady deterioration in job opportunities for people with low education'," Samuelson writes. "One setback leads to another. Poor skills result in poor jobs with low pay and spotty security. Workers with lousy jobs are poor marriage candidates; marriage rates decline. Cohabitation thrives, but these relationships often break down."

Princeton University's Anne Case and Angus Deaton write, "As a result more men lose regular contact with their children, which is bad for them, and bad for the children.” The researchers believe "these 'slow-acting and cumulative social forces' seem the best explanation for the rise in death rates. Because the causes are so deep-seated, they will (at best) 'take many years to reverse'."

Samuelson says that's not the whole story. "But even if their theory survives scholarly scrutiny, it’s incomplete," he writes. "It misses the peculiarly American aspect of this story. The proper question may be: Is the American Dream killing us? American culture emphasizes striving for and achieving economic success. In practice, realizing the American Dream is the standard of success, vague though it is. It surely includes home ownership, modest financial and job security, and a bright outlook for our children."

Samuelson concludes, "When striving accomplishes these goals, it strengthens a sense of accomplishment and self-worth. But when the striving falters and fails—when the American Dream becomes unattainable—it’s a judgment on our lives. By our late 40s or 50s, the reckoning is on us. It’s harder to do then what we might have done earlier. We become hostage to unrealized hopes. More Americans are now in this precarious position. Our obsession with the American Dream measures our ambition—and anger."
Written by Tim Mandell Posted at 4/04/2017 12:42:00 PM