Illegal border crossings into U.S. down, but more money (much from drugs) going into Mexico

While the Trump administration has been focused on securing the U.S.-Mexico border to keep illegal immigrants out, border security officials say an even bigger problem is the people leaving the country with money from Mexican drugs sold in the U.S., Ron Nixon and Fernanda Santos report for The New York Times. "Though the cartels sometimes hire legitimate companies to buy goods like silk and ink cartridges and export them to Mexico, where they are sold for pesos, a more common method is to simply pay someone to drive the cash over the border."

About $300 million in cash that was headed into Mexico has been seized since 2008, reports the Times. That is likely just a fraction of the actual total, customs officers and border patrol agents told the Times. So far this year, they said, seizures of southbound cash are up 48 percent through March: $18.6 million compared with $12.6 million over the same period last year." Officials cite a decline in apprehensions of undocumented migrants trying to enter the U.S. for allowing them to increase the number of officers looking for money and guns going into Mexico. (Times graphic: Border crossings into the U.S. are down) 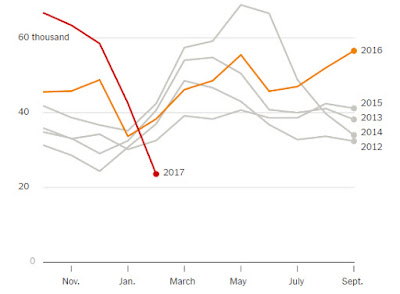 A 2016 report from the federal Bureau of Alcohol, Tobacco, Firearms and Explosives found that about 70 percent of firearms seized in Mexico from 2009 to 2014—more than 73,000—could be traced back to the U.S., reports the Times. The bureau's parent agency, the Department of the Treasury estimates that drug trafficking from sales in the U.S. generates $64 billion annually.

"The money travels in many ways, including by mail, in boxes full of money orders worth hundreds of thousands of dollars and, in bundles along highways, stuffed in suitcases or in hidden compartments, much like the drugs that come north," reports the Times. "Sometimes, it goes from one country to the other in the form of payments and deposits that would be legitimate but for the fact that they are made with drug profits."
Written by Tim Mandell Posted at 4/05/2017 12:15:00 PM