A report by the inspector general at the Department of the Interior found that its Office of Surface Mining Reclamation and Enforcement is failing to make sure states give coal reclamation projects priority over non-coal projects: "As a result, non-coal reclamation is completed while coal-related hazards persist."

The report said the agency is failing to crack down on five of the 25 states—Mississippi, Louisiana, Montana, Texas and Wyoming—"that get grants from the Abandoned Mine Land fund," Dylan Brown reports for Greenwire. "The fund comprises fees charged on every ton of U.S. coal for cleaning up mine sites abandoned by companies before the law was signed in 1977."

The five states keep getting grants though regulators have determined that all their eligible coal sites have been reclaimed. That leaves less money for states like Wyoming, the biggest coal state, which "has an inventory of $90 million in unfunded reclamation," Brown writes. But Wyoming is also part of the problem, he notes: "Its inventory is growing as the state spends on non-coal projects. From 2013 to 2016, Wyoming spent $214 million on non-coal projects and $166 million on reclamation." 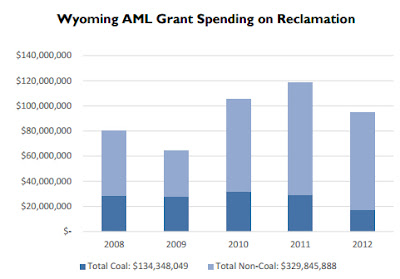