KFC to stop using chickens with antibiotics by 2018; farmers will need to raise more chickens 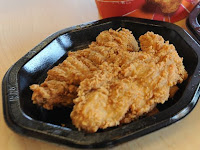 Kentucky Fried Chicken announced today that it will stop using chickens that contain antibiotics by the end of 2018, Zlati Meyer reports for USA Today. "Other quick-service chains, such as Chipotle, McDonald's, Burger King, Panera and Wendy's, have made similar pledges to eliminate antibiotics in their chicken. But KFC said it believes it is on the cutting edge in trying to go without antibiotics when it comes to on-the-bone chicken."

KFC, which works with more than 2,000 farms in a dozen states, said the change won't result in higher prices at its 4,200 U.S. outlets, but it will require growers to "raise more chickens in order to meet KFC's size demands without the antibiotics," Meyer writes. "KFC also recently pledged to eliminate artificial colors and flavors from all of its core products by the end of 2018 and to have 100 percent of the menu, except for drinks and third-party products, free of food dyes by the end of this year."
Written by Tim Mandell Posted at 4/07/2017 11:54:00 AM