Lack of education, jobs, training keep too many rural youth not in work or school

The number of "disconnected" rural youth—meaning they are not in school or the workforce—has overtaken the number of similar youth in urban areas, Tim Henderson reports for Stateline. Measure of America, a project of the nonprofit Social Science Research Council, said 4.9 million youth between 16 and 24 are disconnected, with 20 percent in rural areas and 24 percent in the South.

One example of the rise in rural areas is Worcester County, Maryland, which has a disconnected youth rate of 25 percent, higher than Baltimore's 20 percent, Henderson notes.  "About 20 percent of young people in extremely rural areas—those like Worcester County with no cities larger than 10,000 people—were jobless and not in school, on average, over a five-year period, from 2010 to 2014, Measure of America said in a March report. That’s much higher than the rate for counties in urban centers (about 14 percent) or for suburban counties (12 percent)." 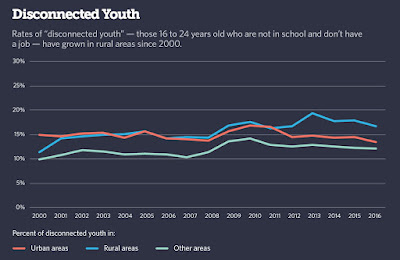 Henderson notes that "the shift is due mostly to a decline in high school enrollment in rural areas after 2011 and an increase in college enrollment in urban areas over the same period. Rural employment also is a large part of the issue, as jobs in many parts of the country have failed to recover from the recession while urban jobs have bounced back and climbed from pre-recession peaks." Rural isolation, which can lead to a lack of good jobs and training centers, is another problem.

The Measure for America report said: “These vulnerable young people are cut off from the people, institutions, and experiences that would otherwise help them develop the knowledge, skills, maturity, and sense of purpose required to live rewarding lives as adults. And the negative effects of youth disconnection ricochet across the economy, the social sector, the criminal justice system, and the political landscape, affecting us all.”
Written by Tim Mandell Posted at 4/27/2017 11:56:00 AM