Iowa has become a national leader in wind power, but not everyone is celebrating the state's success, Donnelle Eller and Kevin Hardy report for The Des Moines Register. Clean energy has led to hundreds of jobs, property tax revenues "and $20 million annually that farmers and rural landowners earn in lease payments for hosting the giant turbines." The state's growing amount of green energy—Iowa leads the nation with 37 percent of its annual electricity portfolio—also has helped attract billions of dollars in capital investment from Facebook, Microsoft and Google data centers.

"But Iowa's growing energy harvest has birthed a new wave of opposition from critics who call wind turbines noisy, over-subsidized eyesores that can be dangerous," reports the Register. "And groups have popped up across Iowa seeking to stop local wind development. Opponents elsewhere have raised familiar arguments against wind farms, from the tax credits they receive to the birds and bats they kill. Landowners have long objected to offshore wind development near pricey coastal real estate." 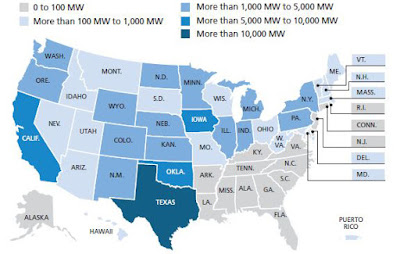 Some say wind energy can revitalize Iowa's rural towns, which since 1969 have lost more than 171,000 residents. During that same time the state's urban areas gained nearly 500,000 people, reports the Register. Daryl Haack, an Iowa farmer who receives about $20,000 annually in lease payments for two turbines, told the Register, "Rural Iowa needs something to put money and people back into the community."

Others "say they feel betrayed by the actions of neighbors and county officials who they believe have sold out to energy firms by allowing an influx of wind turbines across the landscape," reports the Register. Mason Fleenor, a cattle producer who said he and his wife built their dream home seven years ago in Ida County and planned to retire there, told the Register, "They're just greedy. I'd move if I could."
Written by Tim Mandell Posted at 4/21/2017 11:25:00 AM