Rural prisons keep closing, and few buyers are willing to turn them into new business venues

Shuttered rural prisons that once helped boost local economies are becoming a hard sell when it comes to finding new purposes for the facilities, Paul Post reports for The New York Times.

Since 2011, "at least 22 states have closed or announced closures for 94 state prisons and juvenile facilities, resulting in the elimination of over 48,000 state prison beds, an estimated cost savings of over $345 million," Nicole Porter reported in December for The Sentencing Project, an advocacy center that supports reducing incarceration.

Of the 13 prisons that have closed in New York since 2011, only three have sold, with just one—near New York City—re-opening, but its plans for a corporate park have so far attracted just one business, Post writes. Ten of the prisons are located in Upstate New York, mostly in isolated areas. Peter Bauer, executive director of Protect the Adirondacks, an environmental group, said "The problem with many of the prisons is that 'they’re in the middle of nowhere." Bauer told Post, "It’s going to be a challenge to come up with creative and adaptive reuses of these facilities.”

The 13 prisons, all of which were medium- or minimum-security facilities, were closed partly because of a drop in crime—down since 2011 from 57,224 to 51,275—and an "emphasis on diverting low-level offenders to programs that would avoid incarceration," Post writes. Patrick Bailey, a spokesman for the state Department of Corrections and Community Supervision, told Post, “The reduction of nonviolent offenders, mostly drug offenders, allowed the state to eliminate about 5,500 underutilized prison beds, saving approximately $162 million, while keeping violent offenders incarcerated for longer periods of time."

While the state is saving money, rural areas that relied on the prisons are hurting, Post writes. "State Sen. Betty Little, a Republican whose district has three shuttered prisons, has strongly opposed the closings, questioning whether the sites can really be turned into job-producing ventures." She told Post, “When the decision is made to close a prison in a rural community, that community loses hundreds of jobs that aren’t going to be absorbed by the private sector. It’s a huge blow that someone from a populated area of New York State wouldn’t understand.” (The Sentencing Project map: States closing or considering closing correctional facilities, 2011-2016) 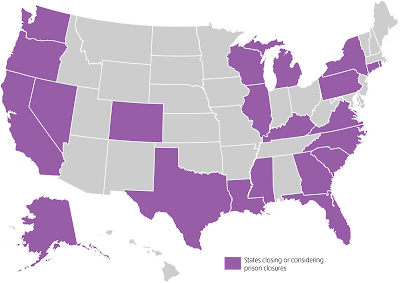