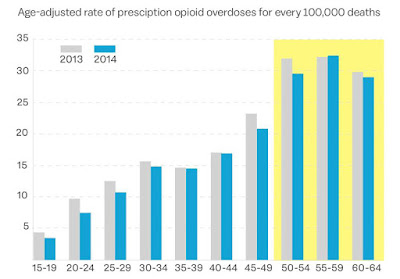 Unick "thinks the age divide is an unintended consequence of states moving to crack down on opioid prescriptions," Sarah Frostenson reports for Vox. Unick told her, “Older people have greater access to pills. But younger people are just starting with heroin and aren’t even making that shift from pills to heroin.” Opioids have become a particular problem in rural areas, especially Appalachia. 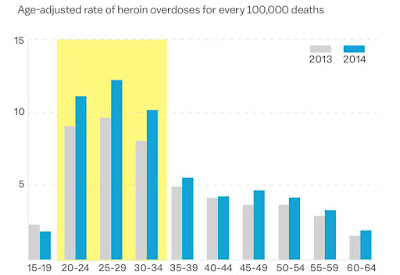 Heroin, for the first time in 2015, killed more people than prescription painkillers, Frostenson notes. But the difference in heroin and prescription painkillers is regional. Unick found that hot spots for heroin deaths were largely concentrated in the Northeast and Midwest, where emergency room admissions have steadily increased, compared to the South and West, where it has remained mostly stable. On the other hand, emergency room visits for prescription painkiller overdoses are highest in the South and West, although data shows numbers have been declining in all four regions since 2012.
Written by Tim Mandell Posted at 4/27/2017 11:36:00 AM