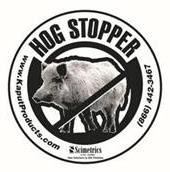 The feral "hog apocalypse" in Texas has been shelved. "Citing the threat of lawsuits, Scimetrics, the company behind the only Environmental Protection Agency-approved pesticide for feral hogs, announced Tuesday it had withdrawn its request for registration in Texas," Morgan Smith reports for The Texas Tribune. Scimetrics said in a statement: "Under the threat of many lawsuits, our family-owned company cannot at this time risk the disruption of our business and continue to compete with special interests in Texas that have larger resources to sustain a lengthy legal battle."

Agriculture Commissioner Sid Miller in February "announced a rule change in the Texas Administrative Code that classifies a warfarin-based compound called 'Kaput Feral Hog Lure' as a state-limited-use pesticide" to combat the state's feral hog problem, which is estimated to cause more than $50 million in damage a year. Miller's decision led to protests that the pesticide is inhumane and that other species might eat it.

Miller, in a statement, called the decision by Scimetrics to pull its request for registration, "just another kick in the teeth for rural Texans," Smith writes. The decision "comes a week after a bill that would require state agency or university research before the use of lethal pesticides on wild pigs overwhelmingly passed the Texas House."

Mark Loeffler, a spokesman for the Texas Agriculture Department, said "there are no restrictions on the company seeking re-registration in the future," Smith writes. He said "the department was honoring the company’s request to remove its application but would continue an already-in-motion process to establish rules governing the use of the poison in the state. The department held a public hearing on the rules in Waco on Monday."
Written by Tim Mandell Posted at 4/27/2017 11:05:00 AM