Native American tribes, many of which did not support Trump, hope he will revive coal

Despite President Trump's lack of popularity among Native American tribes, some are eagerly waiting to see if he follows through on his promise to revive the coal industry, Julie Turkewitz reports for The New York Times. Indian lands hold an estimated 30 percent of coal reserves west of the Mississippi and 20 percent of known U.S. oil and gas reserves.

Among the 13,000 members of the Crow Nation in Crow Agency, Mont., where Hillary Clinton won the surrounding county in November, residents in the impoverished community believe that if Trump follows through on his promise to revive coal, it will revive the Crow's once main source of revenue. Paul Little Light, the tribe's chief executive, told Turkewitz, “A lot of people are not Trump fans here. Very few. But we would be his best friends if he brought back coal.”

Turkewitz writes, "The Crow are among several Indian nations looking to the president’s promises to nix Obama-era coal rules, pull back on regulations, or approve new oil and gas wells to help them lift their economies and wrest control from a federal bureaucracy they have often seen as burdensome." One person on their side is Secretary of the Interior Ryan Zinke, who has said "he would help native nations get fossil fuels to market." (Times map: Crow reservation) 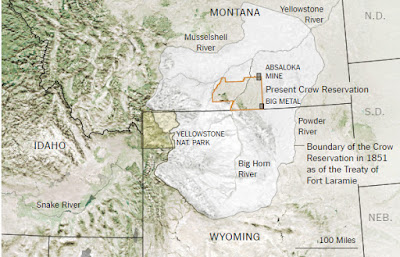 "Stripped of other resources, many tribes have had to rely on pit mines and oil pads to fund their budgets," Turkewitz writes. "This has bred conflict within not only Indian nations, but also individual hearts, with people torn between revenue that feeds their children and a deep commitment to protecting the environment." Ten Bear Reed, who is raising two children on a $9-an-hour casino job, told Turkewitz, “I care about the environment, I really do. But when you see that money, then you don’t care. Because you’re getting the thing you need.”

Turkewitz writes, "On the 2.3-million-acre Crow Indian Reservation in southern Montana, at least half of the tribe’s non-federal budget comes from a single source: a vast single-pit mine at the edge of the reservation, called the Absaloka, which sends brown-black coal by rail to Minnesota’s largest power plant. . . . In 2013, the tribe made a deal with Cloud Peak Energy for a second coal mine, the Big Metal, which could bring $10 million to the Crow in the project’s first five years. Cloud Peak hoped to export that coal to Asia through a proposed terminal in Washington State. That terminal was vetoed by the Army Corps of Engineers under Barrack Obama, but Crow leaders hope to reopen the discussion."
Written by Tim Mandell Posted at 4/03/2017 11:40:00 AM