Sen. Chuck Grassley, a Republican from Iowa, one of the nation's leaders in generating electricity from wind energy, slammed an Energy Department study that Grassley said was "pre-determined" and created to show that renewable sources such as wind "will not be viewed as credible," Valerie Volcovici reports for Reuters.

Grassley wrote in a letter to Energy Secretary Rick Perry: “I’m concerned that a hastily developed study, which appears to pre-determine that variable, renewable sources such as wind have undermined grid reliability, will not be viewed as credible, relevant or worthy of valuable taxpayer resources . . . Not only is Iowa's wind energy resource reliable, it's also affordable." (American Wind Energy Association graphic: Wind energy in the U.S., state production totals by megawatt) 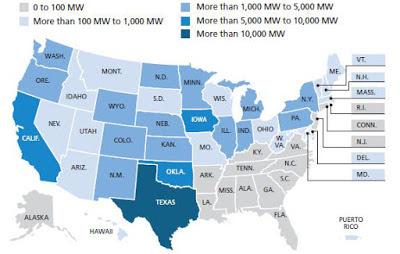 Grassley said Iowa's electric rates, which have only increased twice since 1998, are frozen until 2029, and are the ninth lowest nationally. He also said any study reviewing the impacts of wind energy on grid reliability and security should look at Iowa as proof of wind energy's success. He noted that the state gets 36 percent of its electricity from wind, and that its largest utility, MidAmerican Energy Co., generates 55 percent of its electricity from wind and expects to raise that to 90 percent in the next few years.

Volcovici writes, "Perry served as governor of Texas, a leading oil-producing state, from 2000 when he succeeded President George W. Bush until 2015. Under his tenure, Texas became the country's leading wind energy producer. But Perry has also been a strong advocate of the fossil-fuel industry. He told Department of Energy staff that he wanted them to examine whether environmental regulations and tax credit programs that bolster wind and solar energy are forcing coal and nuclear plants to shut down prematurely."
Written by Tim Mandell Posted at 5/18/2017 11:03:00 AM