USDA says farm sector profits will likely be stable this year, after three years of decline 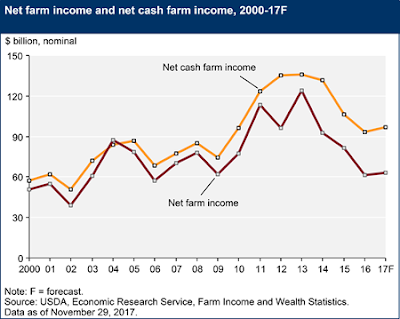 After three consecutive years of decline, profits in the farm sector of the economy are expected to be relatively stable in 2017, according to a report on farm income and wealth from the U.S. Department of Agriculture. The report is released three times a year, in February, August and November.

Chuck Abbott reports for Agriculture.com, "In August, USDA said income was stabilizing after plunging in 2014 and 2015 and could increase slightly from 2016’s levels. Even so, income this year would be one half to three fourths of the record set at the peak of the commodity boom."

Abbott reports Ohio State University economist Ani Katchova said at a conference early this month, "Hopefully, the worst is over. Financial conditions seem to be improving, albeit slowly."
Written by Heather Chapman Posted at 11/30/2017 11:15:00 AM