The release of "The Post," a movie about The Washington Post's handling of the Pentagon Papers, prompted the newspaper to pick the 10 best movies about journalism and get some major players to write about them. There's no rural journalism among them, with the very limited exception of Charles Foster Kane's early forays into the newspaper business. We have to wonder about the lack of movies about great rural journalism, since there are so many movie-worthy stories. 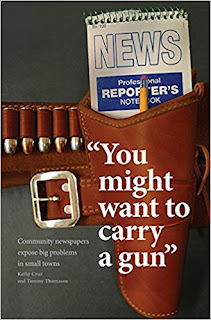 Some such stories are outlined in You Might Want to Carry a Gun: Community newspapers expose big problems in small towns, a book by Kathy Cruz of the Hood County News in Granbury, Tex., and Tommy Thomason of the Texas Center for Community Journalism at Texas Christian University. It would be a good Christmas gift for a courageous rural journalist (or one who could use a little more courage). It's available on Amazon. (Disclosure: Tommy Thomason is an academic partner of the University of Kentucky's Institute for Rural Journalism and Community Issues, publisher of The Rural Blog.

I recall the Pulitzer Prize win for the weekly Point Reyes Light north of San Francisco was made into a TV movie more than 30 years ago. I met the publisher, Dave Mitchell, at a convention in Palm Springs in 1983 before the movie came out.