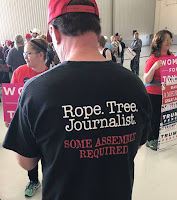 "Walmart has pulled a T-shirt offered by an outside seller from its online store after a journalist advocacy group told the retailer it found the shirt threatening," The Associated Press reports. The shirt says “Rope. Tree. Journalist. SOME ASSEMBLY REQUIRED.” This photo of was taken at a Donald Trump rally in Minnesota the Sunday before last year's election.

Walmart told AP,  “This item was sold by a third-party seller on our marketplace and clearly violates our policy. We removed it as soon as it was brought to our attention, and are conducting a thorough review of the seller’s assortment.” The third-party seller, Teespring, "confirmed that the shirt has been pulled and said it is working to prevent such content from slipping through its filters," AP reports.

The Radio Television Digital News Association complained to Walmart about the shirt. “We are grateful for Walmart’s swift action, but dismayed that it, and anyone else selling the shirt, would offer such an offensive and inflammatory product,” RTDNA Executive Director Dan Shelley said.
Written by Al Cross Posted at 12/01/2017 09:42:00 AM