Rural newspaper's chair-and-cigar-box 'news rack' should 'end up in the Smithsonian or Newseum,' professor writes 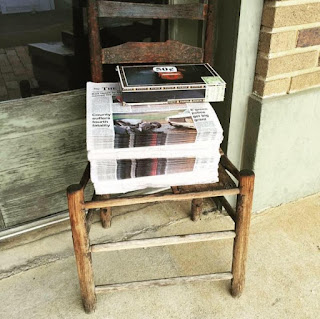 "The Evergreen Courant's famous chair-and-cigar-box newspaper honor system ought to end up in the Smithsonian or Newseum someday," retired Auburn University journalism professor Ed Williams writes for Connecting, a subscription-only newsletter for retirees of The Associated Press and others. He is a native of Conecuh County, home of the paper.

"No story about this South Alabama county-seat weekly paper would be complete without mention of the old wooden chair that has 'sold' thousands of newspapers for decades from its spot just outside the Courant's office on Rural Street in Evergreen," Williams writes, including a couple of photographs.

No one recalls when the chair was first used as the Courant's news rack, but most agree it's been doing the job for the paper since World War II. Third-generation owner Robert Bozeman III told Williams, "All I know is that the chair was there when I was born and before so I would say it's at least 60 to 70 years old."

Williams reports that someone suggested to Bozeman that he place "a recliner next to the stack of weekly papers for eager Conecuh Countians who can't wait to get home to read their hometown paper. Alabama newspaper man Bill Beckner even suggested adding a coffee pot."

Beckner, former senior vice president of Boone Newspapers, told Williams, "Nothing better than a weekly newspaper hot off the press."
Written by Heather Chapman Posted at 3/27/2018 09:11:00 AM