Surface mining in Central Appalachia needs more land to produce less coal than in years past, as illustrated a study from Duke University featuring a new interactive mapping tool by SkyTruth, a nonprofit specializing in satellite imagery. The apparent reason is that available coal seams are getting thinner as thicker ones are mined out; mines have moved as much as 20 tons of rock and dirt to get a ton of coal; the ratio was once in the lower single digits. 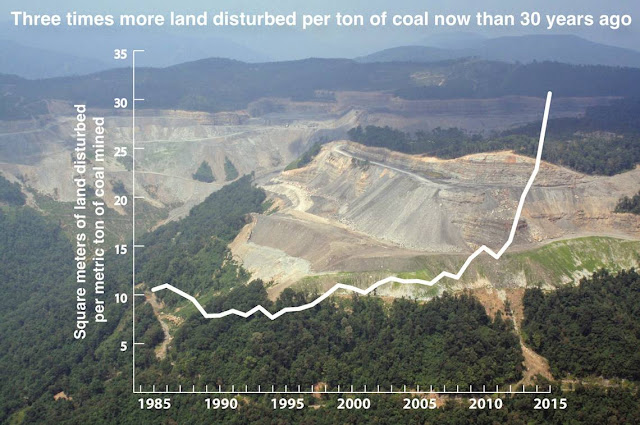 "Researchers estimate that between 1985 and 2015, an average of 21,000 acres was converted to bare earth and rubble in central Appalachia each year -- an area about half the size of Washington, D.C.," says a report on the study. (Federal law requires the mined area to be reclaimed.) "This analysis places the total estimate since the 1970s at about 1.5 million acres. "That is an area 18 percent larger than the state of Delaware, and only 3 percent smaller than Everglades National Park," said first author Andrew Pericak, who conducted the research in the lab of biology professor Emily Bernhardt at Duke. Read more here.
Written by Heather Chapman Posted at 7/27/2018 11:58:00 AM